At best, Ancient Aliens is worth a good laugh.

We’ve been keeping an eye on the show, Ancient Aliens, on the History Channel. We also did some fact-checking only to find that the facts in many cases are omitted so as to not get in the way of a fantastical story. If not that, it is blatantly false information. 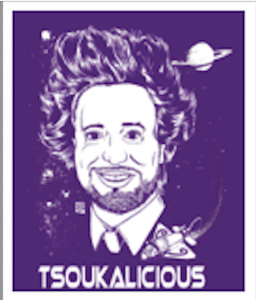 One of the best yet comes from the flamboyant Giogrio Tsoukalos. When he offers his “expert opinion” on the Carnac Stones in Brittany, France he says they, along with the Great Wall of China, “can be seen from space.”

We did some searching on Google Earth. None of those megalithic rocks can be seen from space. And they sure are not visible to the naked eye from a window of the Space Shuttle zooming by at 17-thousand miles an hour.

Fact: No, you cannot see the Carnac Stones or the Great Wall from space.

And as Dr. Bernard Harris, the first African-American to walk in space told me a few years ago:

“If you could see the Great Wall of China from space, you’d also be able to see roads.”

There’s a snake oil salesman under every megalithic rock formation….

Tsoukalos is even selling t-shirts and bumper stickers.

One other disturbing point: Had ancient aliens flew a million light-years across the universe to get here, that they would ask humans to build landmarks for them to navigate our airspace?

Don’t you think they’d pretty much have already figured that out?

Looking back as I edit this piece several years later….

The whole Ancient Aliens show is proof you can get on TV by saying outrageously whack things.

These people calling themselves “Ancient Astronaut Theorists” are making money selling T-shirts for heaven’s sakes.  Tsoukalos on Twitter was saying the other day that the demand had been so great it had crashed the Website. Of course, he also said you can see the Carnac Stones from space and we know that isn’t true.

The fallacy of this show is that in challenging the teachings of modern archeological and historical thought that basically suggests that our forefathers of the past 5-13,000 years were kind of like the monkey scene in 2001: A Space Odyssey where they’re just learning to use bones as weapons and tools, and not very intelligent, they have swung the pendulum the exact opposite way by saying they weren’t smart enough to have figured this stuff out either that they had to have little green men from another planet do it.