I've been to San Francisco many times in my life.  Remember, we used to live in Atwater, CA, when Dad was stationed at the now-closed Castle AFB.   Because I had asthma and the winters in the San Juaquin Valley were horrible for my allergies, we often had to drive up here to the Naval Base to see their allergist. 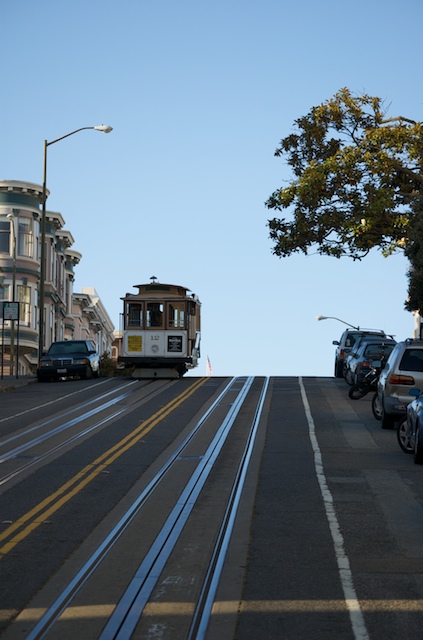 And then two years ago when we brought all seven kids to Yosemite for a week, we made a last evening trip down to Pier 39, aka, Fisherman's Warf, the tourist trap of all tourist traps, but a fun place nonetheless.

When we were here with the kids, I'd wanted to ride one of the famous trolleys, but we didn't get the chance.  Well, thanks to the fact that my body still is on Central Time and not Pacific, I was up early and out walking.

At the corner of Market and Powell, I found a trolley car waiting to make another 20-minute run down to the warf.  There were about four or five others on with me, so I had plenty of room to turn around and shoot photos, etc.

I love the photo to the left of another trolley just coming over on of the hills.  The lights of the clear blue sky shining down on the track just pull your eyes off into the infinity of the wild blue yonder.

As one of enjoys art, it was nice to look along the streets and see the varying kinds of ornate architecture and then to make a study of some of the people who also had ventured out in the morning with me.   There are few things as great at that first morning light to shoot with.

My Great Pyrenees Molly & Maycee – Letting Go And Letting In