(Editors note: I have prepared this news advisory for my client, the Lucio, LaFleur and Associates Family Law Firm of Richardson, TX.)

RICHARDSON, TX—Veronica Galaviz, the woman who was nearly
killed early Wednesday morning in a shooting and house fire when her estranged
husband, Jacque Eagon, broke in and violated a Dallas County protective order,
will hold a news conference Monday morning in Richardson to present in depth
facts that show had Rowlett Police acted upon notifications could have avoided
the entire life-threatening event. 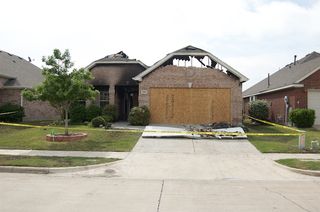 The news conference, which will be held at in the
second-floor offices of Lucio, LaFleur and Associates, located at 2425 N
Central Expressway, Suite 231, in Richardson, will begin at 10 a.m.

During the event, Ms. Galaviz will speak publicly for the
first time since the catastrophic event on Wednesday that led to the shooting
of her friend and her estranged husband setting fire to the home and fatally
shooting himself.

She will be joined by her counsel, Julie Lucio, whose firm
represents Galaviz and had been handling her divorce case from Mr. Eagon, and
will be asking questions about why the Rowlett Police Department did not arrest
Eagon when Galaviz reported numerous violations of a Dallas County Court
protective order.

About 1:25 a.m. Wednesday, Galaviz awoke to find her
estranged husband, Eagon, in her home.
Eagon, who was armed with a shotgun, told Galaviz that he was going
to kill her.  Galaviz’s friend,
David Canmann, also was in the home and began to fend off Eagon but he was shot
in the hand in the process.  Galaviz
and her friend fled from the house before Eagon was able to reload his weapon.  When the Rowlett Fire Department
arrived at the home at 1:44 a.m., it was engulfed in flames and Eagon was found
dead inside.

According to court records, Eagon had the protective order
enforced upon him in December 2010.


Ms. Lucio will provide documents showing that Galaviz
reported to Rowlett police on multiple occasions that Eagon had violated the
protective order, including a videotape of him slashing tires of her car at
home on Valentine’s Day, this year.

Have you given much thought about climate change?

Glenn Greenwald Is Violating What He Said In His Own Words