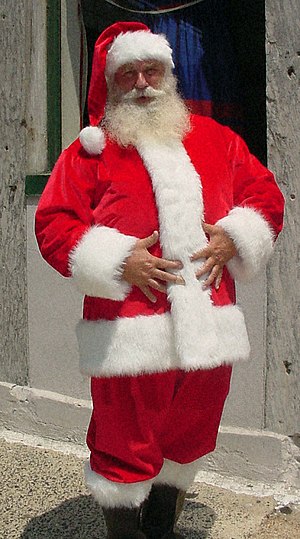 Santa’s On A Diet, Exercising  And Encouraging Better Eating Habits


Having served in Santa’s Elf Corps once upon a time, I recently was lucky enough to meet with Santa Claus and talk about how both of us need to lose weight, start a healthier diet and daily exercise to encourage better eating habits, including healthier Christmas Eve treats.

In January, through my PR, social media and marketing company, Claxton Creative, LLC, I’m also going to be sending letters to New York advertising agencies calling on them to be more responsible and use thinner representations of the Jolly Old Elf in 2011.

In our conversation it became clear, Santa isn’t a happy man.  His weight is really troubling him these days.  He said he realizes that his weight and eating habits are setting a poor example for children of all ages.  The man who has been a positive influence on generations of children said he is intent on remaining a positive influence.  He said the best way he knows to do that is to add some healthy changes in his eating habits and for advertising firms to be more responsible and use healthier representations of his obese figure.

Santa said that in days of yore, children used to leave him carrots and celery.  Then in the 1950s when chocolate started getting mixed in with cookie treats, children started leaving him whole milk and sugar-coated cookies, cakes and pies.  After a few million of those in one night, well, it’s no wonder why Santa is so out of shape.

He said he’s been taking the reindeer for walks each evening after dinner and going to the North Pole gym in the morning.  He said it’s really making a difference, but there are ways children nowadays can help him out.

When we talked, we shot a new EA SPORTS Active 2 workout that I’ve posted on YouTube.

Recently I met with Dallas nutritionist Donna Israel, the president of Dallas’ Professional Nutrition Therapists, LLC, who made Christmas Eve snack suggestions that are good for all, including Santa.

While not completely eliminating traditional sweets from Christmas Eve Santa snacks, the nutritionist has recommended choices of the following items for Santa and the reindeer:

Now like many of you, I remember watching the  TV classic of Mrs. Claus saying, ‘Eat, Papa! Eat!’ but we all know now that having a ‘Fat Santa’ isn’t as important as having a “Healthy Santa.”

When children see a fat Santa they become desensitized to his obesity.  Santa has had an impact on hundreds of generations, and with obesity so prevalent in our society, he knows if he started showing up a little skinnier in TV ads and magazines, people might begin to think about how important it might be for them to shed a few pounds, too.

In 2009, I began using the EA SPORTS Active for the Wii after Santa brought us a Wii for Christmas 2008.  My weight has been a problem for a long time.  In fact, I’ve never been able to use Wii-Fit because of its 330-pound weight limit.  From April to Sept. 2009, I lost almost 50 pounds using EA SPORTS Active and then it’s follow up product More Workouts.  A bout with Diverticulitis in September sidelined my exercising, which led to my gaining back most, if not more.  With the release of EA SPORTS Active 2,  I’m back on the program.

I want to tell you about Professional Nutrition Therapists, LLC.  Their website is www.foodtherapyrd.com. A complete recipe for weight management success is listed on their homepage under “Weight Management Solutions.”  The company’s Genergy program is currently getting twice the weight loss due to testing for genetic link to carbohydrates or fat.  PNT says a balanced plan is the cornerstone of a successful personalized plan. They also offer a Take Shape for Life Program that has s a structured caloric approach.

EA SPORTS Active didn’t ask me to include them in this video, but it’s important for me to tell you that I’ve been working with them since February 2009.  They’ve done nice things for me like a trip to Santa Barbara, New York City, and Los Angeles.  I’ve also received a copy of the product each time a new version has been released.  Their corporate literature says EA SPORTS Active is an innovative line of interactive fitness programs that offer personalized, customizable workouts.  Developed in collaboration with fitness experts, EA SPORTS Active focuses on improving muscular strength, endurance and flexibility, as well as improving cardio, which can help achieve fitness goals including building muscle, increase energy levels and weight loss.   EA SPORTS Active tracks your movements on screen to give you real time feedback on your workout and, similar to personal trainer, provides clear instruction, feedback on technique and encouragement.

Oh yeah, Santa said if you leave the Wii on Christmas Eve, depending on how he’s doing, he might just do a workout in your living room.  He said he’ll try to keep it quiet and that he hopes you won’t mind.  Merry Christmas.

Writing A Novel – Characteristics of People Who I Do NOT Like