The Super PR Problem in Dallas 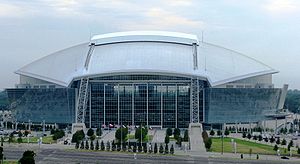 There are a few key rules in the public relations world.  The first oft most repeated one is “Never tell a lie.” After that, there’s debate at which should be ranked second.

This week in Dallas, Rule #2 should be called–Don’t tempt fate or don’t say “You’re ready for anything.”

The news narrative Sunday and Monday in Dallas was light and the excitement was there.  The news in town essentially had little to do with news.  The DFW news media was into what could be referred to as, “We had a dance the other night and every body came and every body had a good time” mode.

There was so very little news on the news here in Dallas, and though the local weather staffs were beginning to say that it might be icy weather come Tuesday, no one believed them, and worse still, Super Bowl XLV Committee leaders all were saying, including Jerry Jones, that contingencies had been planned for.  The repeated video clip was, “We had to present to scenario plans, one for good weather, one for winter weather.” Monday night in the local FOX program, news anchor Steve Eager said the ground “was too warm for anything to stick.”


Then at around 3 a.m. Tuesday, all wintry hell broke loose upon the DFW area.  It came quick and furious.  And in spite of  how warm it had previously been in North Texas a few days before–76 on Saturday–it landed on the ground and it stuck to everything.  Along with it came freezing temps.  At this writing, the temp in DFW hasn’t been above freezing since about 4 a.m. Monday.

Schools closed.  Businesses closed.  Semi-trucks were jackknifed throughout the interstate highways in DFW.  Since Monday, the Fort Worth Police Department has worked more than 800 car accidents.

On Wednesday, power throughout Texas was off in many homes.  Because the power grid was nearly tapped out, rolling blackouts began across the entire state.

On Thursday, there were still freezing temps, and the weather staffs began to talk about a little light dusting for snow in the DFW area.  >1 was on nearly all the maps.  Later in the day they began to bump it up to 1-2 inches.

Friday morning, five inches of snow fell.  Traffic once again was snarled. And the story about how prepared North Texas was for wintry weather unraveled completely and became a mockery to news media from around the world.  To book, it was learned late Thursday that Texas Gov. Rick Perry wasn’t even in Texas.  He was in California.  An opportunity to get the Texas National Guard involved, to have TEMA, extra resources from TxDOT, all of that, was missed.

Hundreds of flights into Dallas have been canceled this week.  Love Field in Dallas was closed for nine hours on Friday.

And with it, the reputation of DFW to host a Super Bowl began to become more than sour to the taste.  At one point this week, Arlington’s Mayor remarked that the press’ attitude had become a “Super Bowl of sour grapes.” Rule #3: Don’t ever bad mouth the press. It just makes things worse.

Will There Be Another Super Bowl in DFW?

By Friday morning, that’s what North Texas residents and the world’s news media began to decide about DFW. The local media added to it.  The answer seemingly became unanimous.  “No.” This became the story of the day.

What’s been disappointing to watch is how the Super Bowl Committee’s PR types, whom ever they are, haven’t come out swinging with other things to have the press write about.  Absent of fresh, red meat, the media finds its own stories, and they’re seldom ever the one you want.

Rule #4–Feed the media a daily supply of fresh, red meat. And today, amazingly, no one thought about what would happen when ice and snow began to fall over the curve of the world’s largest domed stadium.  Initially, reports were that seven people had been injured, one critically.  On CBS Nightly News, Katie Couric was on with video rolling of ice falling off the roof and a plume of white billowing about.  ESPN has video and commentary about it. Sports Illustrated has been reporting about how bad things have been.  And from the look of it, the Super Bowl Committee, Jerry Jones, the Mayors of Dallas and Fort Worth, Arlington, and we already mentioned the governor of Texas is MIA, there is little or no counter messaging going on.

Rule #5–Don’t let someone else define you

And so like we noted above, when there is no message coming out of your camp, someone else will fill it for you.  In this case, it’s 5,000 members of the world’s press.  It’s better to tell your own bad news, always.  The NFL’s Commissioner tonight was seen on all the TV stations, sheepishly holding a microphone and looking like a deer in headlights.  The Super Bowl in DFW has been defined, first by the weather, and second, by reporters who have had little else to do but join in the reporting by the local news media about how bad conditions are.

And to use the cliche, perception, unfortunately, is reality.

Now is when Jerry Jones, Mayor Cluck, the NFL Commissioner, anyone, needs to step forward and pull a Don Draper and write the letter, one-page ad in the New York Times and say that they’ll never handle a tobacco account again.   That doesn’t mean DFW should concede that Jerry World shouldn’t be the home for say, Super Bowl L, but it needs to something positive, and defiant of the mood that’s come over DFW like a, snow cloud, for lack of a better term.   Of course, the game Sunday, hopefully, will do a lot to help that.

But something clear and pronounced needs to be said.  Roger Staubach is probably the best messenger for this.  Troy Aikman would be a good choice, but he’s committed to neutrality at FOX.

Yes, a news conference with Roger where he should:

That doesn’t mean things will be better, but it’d go a long way.  It’d give the media something to write about, and while it’d still be focused on what is a problem, they’d at least hear the humility and maybe better appreciate that even Jerry Jones is human and mistakes do happen.

And then it’s a matter of hoping like crazy that forecasters are wrong about the 40 percent possibility of more wintry weather Sunday.  And worse still, the potential for it next week.  If these fans and media can’t get out of DFW to get back home, that’s when things are really going to get bad.

The full-page ad in the New York Times, Green Bay and Pittsburgh papers probably wouldn’t be a bad idea either.  Oh, and don’t forget USA Today, The Dallas Morning News and the Fort Worth Star Telegram.

Is Santa’s Sleigh ready for Christmas? Find out the latest here!

You Suck At Photoshop