What can happen when a Protective Order isn’t enforced: Murder

I helped put together a news conference yesterday with Julie Lucio of Lucio, LaFleur and Associates and their client, Veronica Galaviz.  Veronica is lucky to be alive. (That's her to the left in the photo below; Julie is to the right.)

Last Wednesday morning at 1:30 she awoke to find her estranged husband in her house with a shotgun telling her he was going to kill her. 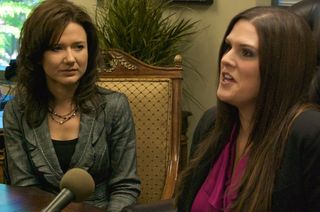 There is a good accounting of the situation in today's Dallas Morning News.  It's a harrowing story as told by Veronica.

She's taking up a mission/calling to help raise awareness to the issue of domestic violence and the thinness of enforcement of protective orders.

As you will see, the Rowlett Police Department says that they didn't have enough evidence to pick up Veronica's husband when she provided them videos, call evidence, etc. to prove that he was in violation of the protective order.

But in talking with Julie Lucio, she says that once a judge has decided there needs to be a protective order in place, it's not the responsibility of the police to decide on the merits of the evidence presented by the protectee.  That's the role of the judge who signed the order.

That's not what happened.  Veronica was never given the chance to present findings in court.  The police instead said there wasn't enough evidence.  But they have it now.

We did the news conference yesterday and the focus was not to bash the Rowlett Police Department.  That's not what's going on here.  Veronica's mission is to help raise awareness that maybe something needs to be done to toughen enforcement of protective orders.

WFAA Channel 8 in Dallas, which devoted almost four minutes of lead airtime to this story last night, cited facts that show about 136 Texas women are murdered each year through domestic violence actions.  Don't you think that's about 136 too many?  Of course, in a society like ours, we're not going to stop them all, but cutting that number by even one would be a great victory.

What are the laws in your state?  How has this issue affected you personally?

Can You Use Hype To Create A Parallax Animation For An iBook Widget?

Did you catch this about school teacher’s nude sexting pictures?