If you've not heard yet, there's been a massive coal mine explosion in West Virgina and as of right now, 25 are dead and four are still missing.  FOX News keeps running the same video over and over of emergency operations crews heading into the area.  From a distance, we only can imagine what is going on to try and rescue those who still are missing.  And of course, a reflection to Homer Hickam in October Sky is a helpful reminder of some of the emotions that must be going on in the sons and daughters of those who have been killed or are still missing. 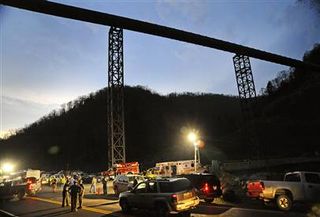 If you haven't yet, stop what you're doing and offer up a prayer for these courageous workers who lost their lives doing the only thing their families know–coal mining.  We take it for granted that coal produces 32 percent of the total US energy supply.  We also take for granted what these men and women do below the ground to get us that energy.

And what probably would have been bigger news today is the announcement coming from the Pentagon about changes in our nuclear arsenal deployment policy.  FOX is making a big deal out of it.  Until I know more, I'm not going to get exercised about it.

It was disturbing yesterday to read that Russian President Putin is going to sell a huge supply of armaments to Venezuela's Hugo Chavez's government down in South America.   That guy clearly has plans of causing trouble on our side of the globe and it being backed with the powerhouse on the other side of the world is quite concerning.

But for me today, my focus is on helping people here in the local area as they try to do good to help improve the lot of others.  God tells us to pray and be focused on what's going on, but also to focus on the part we can actually impact.  That, too, was part of the lesson I learned during my information diet that I've been on and will resume.

There is so much noise going on in the world.  So many windmills we could spend a day chasing and being upset about.  But it's more important to be focused on two things: God, and what we can do within our own scope of influence to help the others around us.  Today shall be no exception.  Yes, we can work to grow our circle of influence, but it's so important to focus on a palatable amount.

My thoughts and prayers go out today to the coal miners, their families and those who are working with everything they have to mount a search and rescue effort.  And don't forget our national leaders who are endeavoring to keep the world safe.  And then don't forget about the people in your life who you could reach out to today.  Will you get a financial reward for doing so?  Maybe not, but that's not the point.  If you live what I'm calling Value Centered Living, it won't matter.  Because if you're adding value to the lives of others, then there will be rewards–for them. And as good things come to them, perhaps, if the world is right, you'll be returned in favor as well.  But if not, it doesn't matter.  You made the world a little better place.  And for that, there simply is no monetary value.

Using Fiverr.com Seller KSDIGOU to Find Keywords for ‘How to,’ and ‘Best X for Y’

The Day After The Snowden Interview