Yosemite closed because of huge snowfalls, @ctemp asks if I’m stupid re #globalwarming

I don't believe in global warming.  Yes, we humans put out waste products that we shouldn't, but I think enough has been proven in recent months to show that many of our so-called "Climate Experts" have been cooking the books over the last 20-30 years and the whole damn thing is a hoax. Sure, we could all do a better job of protecting mother earth.  And I do my part.  I do my best to conserve energy by turning off lights in the house, turning up the thermostats in the summer and down in the winter.  We do some recycling.  I have planted more than 40 trees on our lot here at the house since we moved in in 2006.  I do what I can to plant fresh flowers every spring, and get really pissed at jerks who throw trash out on to the roadways.

Heck, I even called former Montgomery Mayor Emory Folmar once when two of his park rangers through cellophane cigarette wrappers out their windows at Buckboard and the Boulevard back in 1989.  The Mayor went into he who casts the first stone mode and I told him that we in the governor's office were very conscious about polluting and were part of the Don't Drop It On Alabama campaign.  He said he wanted to make sure "because two park rangers are going to get their butts chewed out over this."

But that said, I don't believe in global warming.  Like all things in life in this world, I think there is a time when things are going to go through cycles where it gets a little warm now, and it gets a little cooler later.  We've had ice ages, we have hot times on this planet and it appears to some we're headed into a new hot period, and to others, it appears that little is changing.

So today, when I opened my email, I found a note from Yosemite Blog saying that my favorite place on earth, Yosemite National Park, is actually closed.  CLOSED.  Maybe this has happened previously, but I've been a pretty close follower of things going on in my favorite place in the world and that's the first time I've heard that.  I know it can snow heavily there.  We were snowed in at our favorite retreat for two days in December of 2007 and that was really more of a light snow. 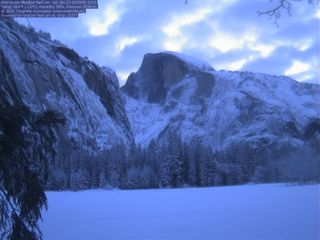 I made a tweet and referenced global warming this morning and @CTemp asked me if I was "Kidding or stupid."  I don't really care for such arrogance and a personal attack in tweets, so he's about to get blocked, but it just shows to go ya that if you question the validity of the myth of global warming, it nets personal attacks.

Maybe @CTemp could have been nicer and said, well, here is my Web site where I have data that's not been doctored by the Climate Experts and I'd really like for you to consider this.  But he didn't.  And most of the global warming types I've encountered have chosen to make their attacks personal. And that's truly a shame because I believe in the possibilities of a healthy conversation.

So, @CTemp, if you would like to post a rationale explanation and information here, I'd invite that.  Let's leave the personal attacks, namely, implying that I might be stupid, to something else.  I'm a daddy blogger, if you haven't noticed and my kids read my blog.  Do you really think it's a positive thing for you to be suggesting that their dad is stupid?

A Summer 2010 dreamline goal: Climbing to the top of Half Dome in Yosemite

Telegraph Fire in Yosemite 95 percent out!