Last week my reading list included Ernest Hemingway’s first novel, A Farewell to Arms! I also read The Torrents of Spring. The third book was one of Hadley Richardson-Hemingway’s favorites by Henry James, The Figure in the Carpet; and last, the incomplete novel by F. Scott Fitzgerald, The Last Tycoon.

Now I am reading Papa’s The Sun Also Rises.

A Farewell to Arms

A Farewell to Arms is a lovely book. A simple love story about a wounded soldier. An American in Italy during World War I who fell in love with a British nurse. He met her before getting wounded, and then, once wounded, their affair really takes off. The book is semi autobiographical. Hemingway really got hurt and really fell for a nurse. But once he returned stateside, she broke it off. Papa intended to marry the woman, even with their ages several years apart. The well-composed story is a must read for any Hemingway fan. Plus, many regard the book as great American literature.

The Torrents of Spring 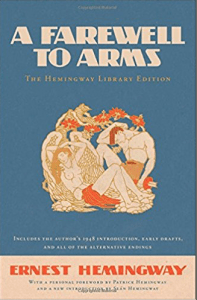 Hemingway’s A Farewell To Arms is still a wonderful read in 2018.

The Torrents of Spring took an afternoon to read. This is a book Hemingway wrote in a few weeks and is a satirical attack on Sherwood Anderson’s Dark Laughter. I will tell you, it is much easier to read than Dark Laughter. In part, the point. Anderson uses a lot of lofty language difficult to follow. I’m about 70 pages into Dark Laughter and have wandered down the Mississippi River with its main character, and I honestly don’t know where we are going. The Torrents of Spring makes fun of the Anderson book; however, I am certain I missed half of the ways. Maybe more.

The Figure in the Carpet

Henry James’ The Figure in the Carpet is an interesting read. A critic has written a review of a famous author’s book and when presented to the author, he says he does not read reviews. But he reads this one and tells the critic that he has a theme that runs through all of his works, but the critic has missed it. The critic begs for the author to part with this secret and he tells him to look further. This sets the critic on a mad chase of discovery.

He has two friends join in this quest. One of the two says he has figured out the mystery. But before he can reveal the secret to the critic, he dies in a car wreck. But the deceased shared the secret with the other. Yet she says she will not part with the secret. She marries and passes away later. The critic befriends the widower and approaches him about the secret well after the woman has passed. The widower takes offense upon learning his wife never shared this secret with him. Will the critic ever figure it out?

The Last Tycoon is an F. Scott Fitzgerald novel written in the writer’s late 30s early slash 40s. Fitzgerald suffered a heart attack at age 41. He never finished the book. Yet reading what is complete serves as a reminder of his storytelling gift. The gift that worked best when not under the spell and distractions of Zelda Sayre Fitzgerald. Maybe she will haunt me for saying such, but one does not exaggerate by saying the world lost out on many a grand novel by the distractions she brought into his life. By keeping Fitzgerald from writing once they married, the fame, fortune, and flappers consumed them.

I enjoyed the book and the fact that Fitzgerald never finished telling the story is poetic.