Shots from The Bazaar in Beverly Hills’ SLS Hotel

We had dinner tonight in what was simply the most different place I've ever been to in my life.  Bar none.  Well, they had one, but trust me, for a kid who grew up in an air force family, who spent most of his teen and young adult life in Montgomery, Alabama, well, going to Bazaar at the SLS Hotel in Beverly Hills was just plain different. 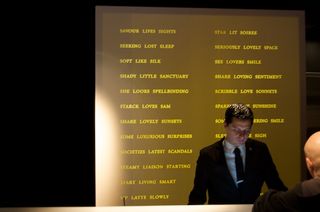 At check-in in the lobby, you are first treated to a black pig and a black horse.  The horse has a lamp shade over his head.  Then behind the check-in counter is a light wall with yellow type giving you options for what SLS might stand for.

From the second you walk into Bazaar, you know you're somewhere different.  Here, sit down in the lit up red chair.  I kid you not. It's rubbery cushions have a red light in them. I cannot be making this up. 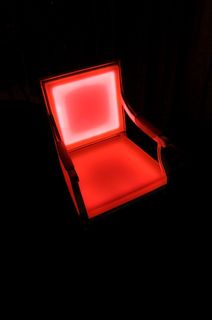 The food was high dollar and fancy pallet.  This was not a meat and potatoes place by any stretch of the imagination.  At one point they brought some cotton candy.  Yum!  What the heck, I just spent weeks working out, so why not.  Well, I bit into it and then was met with something squashy.

My mind was playing tricks on me I thought.  I just bit into cotton candy.  You know, I could hear carnival sounds playing in my head.  And then the taste of the squish set in.  What in the world.  Okay, my pallet started recovering from the surprise.  Ah, what the hell is this, please?  Oh, that's duck liver covered with cotton candy. 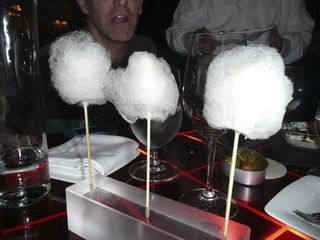 I'd show you a picture of the cotton candy, but you wouldn't believe me, and plus, it came out a little fuzzy.

Then there were these eggs that you were supposed to put on your tongue and then they popped.  I still hadn't recovered from the duck liver, so I passed.

The entire night was spent waiting for the meat and potatoes that never came.  For a partial Southern boy, this was not my idea of a night on the town, but I can at least now say I've been to Bazarre.

So what lies ahead tomorrow?  We're supposed to be downstairs for breakfast at 8 a.m. PST.

And now it's time to go to bed.

Who Am I? The Self-Discovery Caused From Writing A Novel

What Would We Learn By Studying The Cold War Military Brat?