Courtesy of the kind fokes @GMTexas today, I went to the Texas Motor Speedway for what was planned to be a great day at the races.  Being a social media Daddy Blogger, this was my first chance of working with a major car company and I have to say, after seeing that the Chevy 2010 Traverse will hold 30 percent more than the Honda Pilot; has a third row perfect for a dad with three girls who love to travel; and just looks darn good with myself in it–I want one. 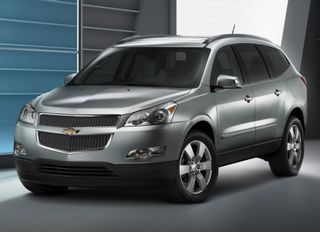 I'd never heard of this car before today.  But I'm all about it now.  I looked at the GM specs and it's a cool ride.  It's got more horsepower than the Honda Pilot, Toyota Highlander and the Ford Flex.

It also has more space: 116.4 cubic feet v. the 87 of the Honda Pilot–hence the 30 percent comparison.  I got to watch people put odd shaped boxes in one just to show how much stuff you can pack into this car and again, I want one.  (See photo below)

Remember when I moved my stuff a few weeks ago in the Chrysler Sebring convertible?  I could have cut the number of trips in half with a Traverse.

And then something that's immensely important to any dad–safety.  The Traverse has a 5-Star crash safety rating.  That's the highest there is.  It has six standard air bags, and head-curtain side air bags in each of the three rows.  As a dad, that's critical to me and something I just don't have in the convertible.  Not to mention On-Star.

Other cool features include the built-in DVD, Bluetooth and even a Flash connection you can plug in with music files.  And if you're really wanting it, you can also add the rear view back up camera and screen.

My situation in life has seemed pretty grim over the past couple of months.  So far 2010 has brought some fairly significant changes in my life–and while at times it's felt like I was getting lemons, I'm starting to make some sweet, sweet lemonade.

Dads and moms, you really should go visit a GM dealer near you and take a look at this car.  I think you're going to be surprised at the product selection at a GM dealership.

I got into that Traverse this morning and I felt like I was sitting in the lap of luxury, all the while feeling like I was in a solid vehicle.  GM has taken a lot of hits on their chin just like I have in the past couple of years.  For me, they're now an inspiration because even as they were in the midst of financial stress and despair, struggling for survival, they, too, pulled it all together and are now turning out a far superior product.

In a few months, certainly by this time next year, I'm hoping to be in a more sound place, just like GM is today.

But for today, I now have a new dream to chase, thanks to GM.  I had a great time today.  It even rained so I didn't see the first race car going around the track.  But that's okay.  I have a new appreciation for a car company that my dad only used to buy when I was a kid.  I have a reason to come back to GM now, too.  And now I have a new journey in which to traverse.

Day One of Travel with Mom from Dallas to Trinidad, CO