Mike Huckabee’s ‘A Simple Christmas’ is Simply Special & Worth Buying

Throughout much of 2009, I've had the opportunity to hear the Huckabee reports as they've played on the local talk radio station, WBAP, here in Dallas.  Former Arkansas Gov. Mike Huckabee, who ran for president last go-around, has authored "A Simple Christmas," a 205-page book containing 12 special Christmas stories about his life and each of them are worth the read.

The book is available in print from The Penguin Group and in many forms.  You can get it in print, get it in eReader on Barnes and Noble, Kindle, and then download the audio off of iTunes and listen to Huckabee read it, which in and of itself, adds a dimension one isn't normally accustomed to with a book. 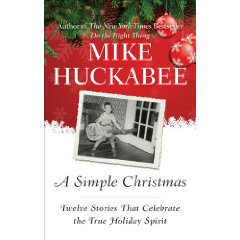 I enjoyed this book from Page 1 of the Preface where Huckabee points out the humble beginnings of Christ's birth–basically in a barnyard, and the fact that the manager, was "An animal's food dish."

Writes Huckabee: "The 'manger' was nowhere near as romantic as it sounds. It was simply a rough wood water or feed trough for the animals. Not long before the son of God was placed in it, livestock had eaten grain out of it. God spent His first few moments as a human in a food dish."  If that doesn't bring it home, then there's one more point he makes.

The whole bit about Silent Night, has to have been a farce.  We're talking about a teen mother here, having her baby in a barn, with no doctor, hot water and the cliche-ish plenty of towels.  No epidurals, sterile beds, and the question would have been who would have been louder?  Mary having the baby or Jesus coming into this world?

But this book takes its readers on a journey of the challenges/opportunities that sometimes present themselves in our lives, and this Christian man's approach to dealing with them in a simple way in faith and reverence to God.

I felt a few times he walked right of the edge of the book feeling a little too political, but at it's heart, it's a pure book to help give a reader insight on what Christmas ought to be–less stress, and more about how you've been blessed.

I'll read this book each year and play it on iTunes at various times as I endure the challenges of the future and use it to refocus my attentions back on the importance of my faith, the message that our Lord God in human form began his life on earth as a baby born in the simplest of fashion and with the knowledge that no matter how feel it feels God has wandered from me, most likely it's me who has wandered from him.

I encourage you to pick this book up this holiday season. Huckabee is on a nationwide book tour and was here in Dallas Friday night, though I couldn't head over there to see him because I was out in front being the neighborhood's Santa.  But it'd be worth your time to go see him if you can and thank him for letting God use him to tell such a powerful story, a simple story, about what it's like to have A Simple Christmas.

A Tree’s Life At McDonald’s — Billions and Billions Served

The Holidays: Leaving Friends And Loved Ones To Be With Family

@KTTunstall’s Glamour Puss; The first sounds of her new grind