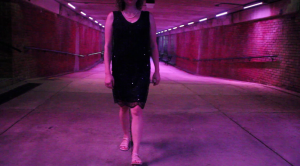 My favorite shot in the short film, “Zelda, Almost Home.” The tunnel leads to Riverfront Park in Montgomery, Alabama.

A short film about Zelda Sayre Fitzgerald and a ghostly return home.

The premise for the short film Zelda, Almost Home is quite simple: Zelda Sayre Fitzgerald, born in Montgomery, Alabama in 1900, lived a wild and tumultuous life with the author of The Great Gatsby, F. Scott Fitzgerald, whom she met in 1918. What if she returns still as a ghost?

The inspiration to shoot Zelda, Almost Home came from watching Vincent Laforet’s Reverie on YouTube. You’ll also notice there’s a hat tip to Damien Chazelle and his film La La Land— Zelda walks in front of a mural. Simon Cade from DSLR Guide has been a big influence and coach as well. (This is my first short film. I’m 51 years old.)

Come to find out, there are ample stories around Montgomery already to suggest the premise for this film is dead on. The halls of Baldwin Middle School are full of stories alleging apparitions of Zelda. As I talked with F. Scott and Zelda Fitzgerald Museum Executive Director Sara Powell last Friday, had two more accounts, recent ones, as the museum prepares to open upstairs rooms as a bed and breakfast.

So as you read and watch the film, please know, that it is grounded in much less fantasy than you might first suspect.

The Making of Zelda, Almost Home

One of the first things any viewer will note is the music, Almost Home, composed by Moby and used with permission from his website, MobyGratis.com. He offers free use of his material provided it’s used for purposes like this—non-commercial and creative expression.

The film is shot entirely in Montgomery, Alabama, from June 22-25, 2017. And that is part of my commentary for shooting this, there are almost no films about Montgomery that are actually SHOT in Montgomery.

It is all shot with a Canon D60, part with a Nifty Fifty lens, and part with an 18-135 mm. The camera for the most part is mounted on a Neewer Image Stabilizer. Shots from the car the camera was mounted on a tripod.

The intersection of Zelda and Fitzgerald, Montgomery 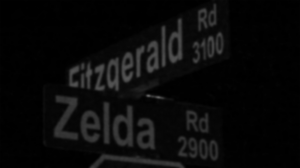 The street sign on the corner of Zelda and Fitzgerald in Montgomery, Alabama.

The opening shot is designed to give homage to Montgomery for honoring Scott and Zelda, while also having our Zelda set the scene that she was full of life when she lived here. It is not hard to imagine the real Zelda spinning around her street sign with glee.

Five minutes after we left the scene, I drove back through and someone had called Montgomery Police to investigate what we were doing. A patrol car was sitting where I’d been parked and was using the lights of the car to light up the street sign.

The house on Felder is now a museum. They have a fascinating collection of Fitzgerald memorabilia and are open every day of the week except Monday for tours. And they are in the process of opening an upstairs suite as a bed and breakfast so those seeking inspiration for their writing or filmmaking can soon stay in the same rooms as the Fitzgeralds for nine months back in the 1920s. This is said to be the longest the two lived anywhere together. And it was the last place they ever lived as a family.

It is often said that Scott and Zelda met at the Montgomery Country Club. But lore now suggests in fact that they met at Winter Place on Goldthwaite. Part of the tale goes is that Zelda’s daddy, Judge Anthony D. Sayre, who lived four blocks away, would not have approved of her being at Winter Place so saying they met at the country club was much more proper.

Christian Lowry, the owner of the house, tells the tale that Zelda was friends with the girls who lived there at the time. He says Zelda used a ring she’d been given by Scott to carve their initials in a second-story window. Mr. Winter, who owned Winter Place across the street, is said to have had a thing for Ms. Zelda when she was younger and so as an admirer when McBryde-Screws-Tyson lies vacant, he sent men into the home to extract with window pane Zelda carved initials into. 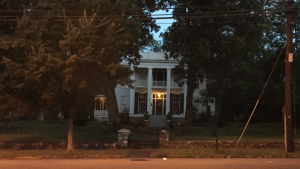 The McBride-Screws-Tyson House in Montgomery, Alabama.

It is hoped, that since Mr. Winter was something of a packrat, as Winter Place goes through renovation, the original piece of glass will be found and hopefully returned to its rightful window.

But this is the sentimental importance of this shot in the film.

*I have been spelling McBryde with an I instead of Y. That’s now corrected on June 30, 2017, though I can’t change it in the YouTube post.

There are stories about Zelda and the train shed in Montgomery. It was the prime way in and out of town for Zelda and Scott. But it is also said that she dressed down one day and walked around with a tin can seeking donations. News of this, of course, stirred Judge Sayre. Which is probably what it was meant to do.

The Riverfront Tunnel has changed over the years. Only recent efforts by the city to bring nightlife back downtown has led to the amazing lighting in the tunnel. The colored lights and the depth of the shot make this one of my favorite scenes in the film. I thought about going back and having Zelda walk perfectly framed up the lighted tunnel but then it’d be too staged and too fashioned, something the true Zelda would not allow.

This is one of the apex locations in downtown Montgomery, connecting with Commerce Street, critical to the city’s past and present.

Over the past 15 years, the Alley has really come to life as an attraction in Montgomery, and wherever there was a party in this town, well, it’d attract Zelda.

The Hank Williams Statue is now the gateway into the Riverfront Park area of the downtown area.

David Bronner has built a series of buildings throughout Montgomery over the past 40 years. The fountain this Zelda moves around was not here when the real Zelda lived. But my character couldn’t resist the temptation to play. She really wanted to get into the water like the real Zelda would have done in New York minute.

Troy State wasn’t located here back in the day but is an important part of the downtown scene, connected to the Davis Theatre and across the street from the Jefferson Hotel where Scott and Zelda are said to have stayed, as well as being near the Rosa Parks Museum, which I believe back in the day was also the Empire Theatre, one of the first air-conditioned places in the hot of the South.

Hat tip to La La Land and having Emma Stone walk past the You Are The Star Mural. Montgomery has a beautiful Civil Rights Mural here and we just had to include it. Zelda was gone before all of that came to be and so it was fitting for her to just walk past. 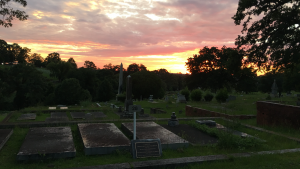 The Sayre family graves are in Oakwood Cemetery in Montgomery, AL.

There is a memorial plaque for Scott and Zelda, their daughter Scottie Smith, and Zelda’s parents, Minnie and Anthony D. Sayre in Oakwood Cemetery. When we arrived for shooting, the sunset was alive with color and emotion.

The first shot is of Zelda mourning over the plaque. She then runs her hands over the stone above her father’s tomb. Out of love and emotion, the Zelda character in the film lies down on the stone above Minnie and puts her hand on Minnie’s name. By then it was too late to see, but the poignancy should not be lost. Zelda would dearly miss her Momma for many reasons all of us would.

Justice Sayre served on the Alabama Supreme Court from 1909 to 1931. Zelda would visit this place and miss her daddy. 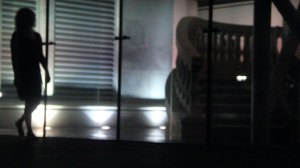 The Capitol is just a stone’s throw from the Old Supreme Court Building.

Chris’s Hotdogs is 100 years old this year. I don’t know if Zelda ever went there to eat before she left town, but the odds are pretty good that she would have. They have served every sitting Alabama governor since they opened. It makes sense the lead Flapper Girl would have been a customer, too.

Many a girl like Zelda has climbed the fence at the fountain to wade into its waters looking down Commerce Street toward the Alabama Riverfront and up Dexter Avenue toward the Capitol.

The sunroom at the museum would hold special value to Zelda. Scottie, their daughter, wrote about its importance during the Christmas the family spent in the home. As a ghost looking back, she would totally take time to look into this room and remember the gem of joy they experienced there as a family for one of the few times ever.

The Museum at night, Felder Avenue

Day or night, the museum is a treasure of Montgomery.

My Own Zelda Ghost Story

So, the night before we began shooting while walking up the drive to the museum, a white and tan cat came running out of nowhere and up to me. I am allergic to cats and don’t care for them. This one, as I was standing in the drive looking at shots, avoided my Zelda actor, (Angie Tatum Weed) and began curling around my legs. I finally said, “Hey Zelda!” and the cat stopped.